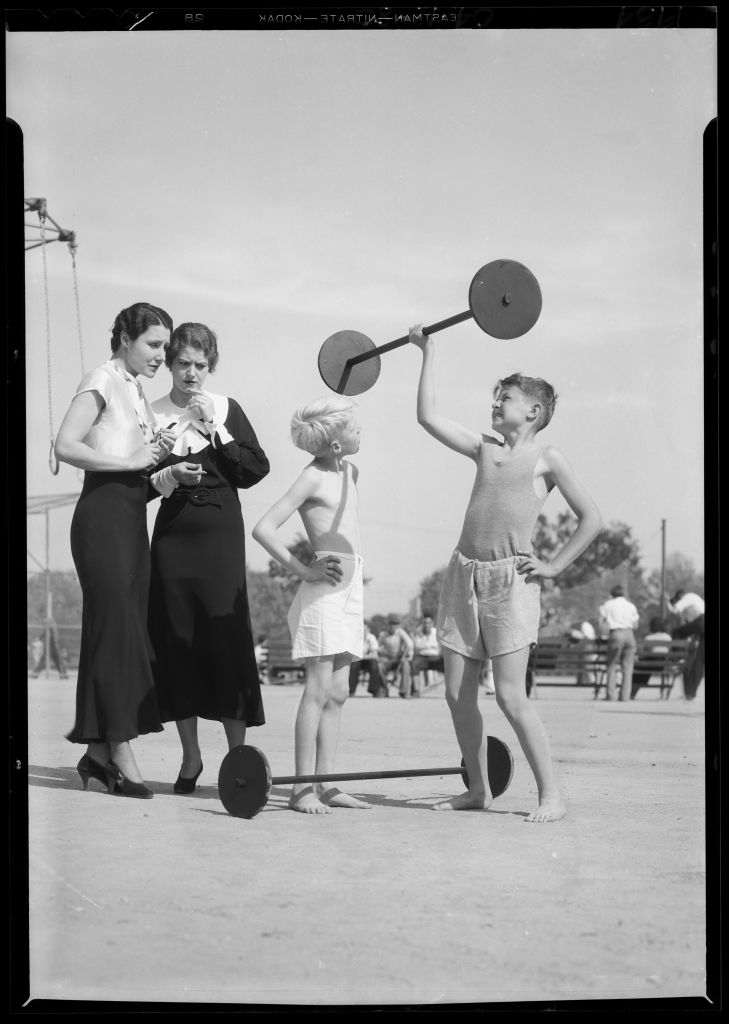 Maybe you’ve been following a barbell training program for a while now. Maybe you do your workouts in a garage gym at home, and your curious kids have been hanging out with you while you exercise and cheering you on for getting swol.

Maybe they’ve even wanted to imitate you, and would like to start lifting weights just like Dad. You start letting them hoist an empty bar a few times, and they feel like they’re ready for more.

But your wife catches wind of what you and the gang have been up to and starts raising Mom concerns. “Is it safe for kids to lift weights? Doesn’t it stunt their growth?”

Bless Mom’s heart, but she needn’t be worried.

Below we deconstruct the myths about kids and weightlifting and discuss how to safely get your kiddos started with pumping a little iron.

The Myths About Kids And Weightlifting

Weightlifting can stunt a child’s growth. This is probably the most common fear surrounding kids and weightlifting. Supposedly, if a child lifts weights it can stunt their growth in a couple of ways.

First, there’s concern that weightlifting will cause the growth plates in a child’s bones to fuse together prematurely, which will in turn hinder their overall growth.

The other concern is that weightlifting can somehow fracture growth plates, and consequently stunt growth that way.

But no proof exists that either of these worries are valid. According to Jordan Feigenbaum and Austin Baraki, who are both medical doctors and strength coaches, no evidence exists that suggests weightlifting inhibits a child’s growth. Zero. Zilch. Nada.

Further, according to the American College of Sports Medicine, a growth plate fracture from weightlifting hasn’t been reported in any research study. In a Barbell Medicine podcast on this topic, Dr. Feigenbaum explained that growth plate fractures are extremely rare and require a severe amount of trauma, more than a child would ever experience lifting weights safely.

So don’t worry about weightlifting stunting your child’s growth. It’s a myth.

Weightlifting is just dangerous. Okay, weightlifting may not stunt a kid’s growth, but doesn’t the activity carry other dangers? Couldn’t children hurt their back, pull a muscle, injure their rotator cuff, damage their tendons, etc.?

In fact, your kid is more likely to get injured playing soccer or baseball than they are lifting weights. Contrary to popular belief, weightlifting is one of the safest physical activities to take part in, for folks of any age.

Bottom line: when done with proper form and supervision, weightlifting is an incredibly safe activity for your kid to do.

At What Age Can a Child Start a Serious Weightlifting Program?

So weightlifting is safe for your kids — it won’t stunt their growth, and they won’t kill themselves doing it. That means you should definitely start your eight-year-old on the Starting Strength program, right?

According to Feigenbaum and Baraki, while it’s perfectly fine to let your kids do a few sets of deadlifts or squats with some light weights, you shouldn’t put them on a regimented, progressive training program (where they’re increasing the weight every session) until they’ve reached Stage 4 on the Tanner Puberty Scale. When a teenager is in Tanner Stage 4, they’re basically in full-blown puberty. Pubic hair is adult-like in both males and females. Females have almost fully developed breasts; males have larger testicles and penis, and their scrotum has become larger and darker. Males in Tanner Stage 4 will have underarm hair and the beginnings of facial hair growth, and their voice will also be deeper.

The reason you don’t want to start regularly weight training a child until they reach Tanner Stage 4 is that before then, they just don’t have the hormone levels (specifically, testosterone) to drive progress and recover from session to session.

Generally, children enter Tanner Stage 4 between ages 11 and 17. It’s different for each child. You might have a 12-year-old who’s in Tanner Stage 4 and physically ready to train when they’re in sixth grade. But you also might have a child who’s a late bloomer and won’t be ready to train until they’re a junior in high school. Don’t try to rush it. Let your child’s physical maturity determine when they start a dedicated training program.

My Prepubescent Kid Wants to Lift: What Should He Do?

Until your child reaches Tanner Stage 4, they don’t need to follow a set program; just let them lift weights in a sporadic and playful way.

The goal with weight training in prepubescent children isn’t to crush PRs, but rather to learn the movement patterns for the lifts and cultivate a lifelong love of fitness.

Research shows that prepubescent children can get stronger following a supervised weightlifting program, but the strength they gain comes from an increase “in the number of motor neurons that are ‘recruited’ to fire with each muscle contraction.” Basically, as your kids practice the barbell lifts, their motor neurons become more efficient, and they’re better able to display strength. Your kids won’t start packing on real muscle from strength training until they reach Tanner Stage 4 puberty.

Here are a few guidelines on how to guide your prepubescent children in weightlifting:

Don’t force weightlifting on your kids. If they express an interest in lifting, encourage it. But don’t force them to do it. That’s a surefire way to instill a dislike for exercise later on. They’ve got the rest of their lives to be serious with their workouts. Most of the professional, super strong dudes I know who have kids have never proactively tried to get them to lift weights. For example, powerlifter Chris Duffin makes his living being strong and teaching people how to be strong. But he has a policy of not actively encouraging his kids to lift. If they want to, he shows them how, and he keeps the session light and fun.

Keep the weight light. Your kids shouldn’t be grinding out super heavy singles when they lift. The focus should be on form, not weight lifted. Most adult-sized barbells will be too large for a child. Get a bar specifically made for kids from Rogue. They weigh about 11 lbs.

Standard barbell weights should be just fine for kids. They probably won’t be using the 25-45 lb plates for a while, but most kids should be able to lift a barbell with 2.5-10 lb plates depending on the lift. My four-year-old daughter, Scout, can press the Rogue kid’s bar with 2.5 lbs on each side 5 times without any trouble. That’s 16 pounds total.

If you’d like to have your kids lift even lighter weights, consider buying some microplates. They allow you to make .5-2.5 lb increases in load.

Keep weightlifting sessions fun and playful. The primary goal when kids start lifting weights or doing any exercise program is help them get the movements down and to instill a love fitness in them. Also, a lot of young children just don’t have the attention span to follow a regimented program yet. Just let them play with barbells and provide feedback on form. With my kids, when they come down to “train” with Dad, they put some weight on the kid bar and bust out a few sets, then they go play with something else, before maybe coming back to do another set. It’s not structured at all.

If your kid wants a program, keep the reps high and increase weight gradually. If your kid really wants a program, create one for them but keep the reps high, and increase weight in small increments over a long period of time. One study that looked at youth weight training found that 1 to 2 sets with 6 to 15 repetitions per set was ideal for young children.

Start kids with a weight that they can lift 10-15 times, with some fatigue but no muscle failure. Then gradually make small increases in the weight. Once your kid can easily do 15 reps of an exercise, you increase the weight by 5-10%.

Your kid should always be able to do 10 reps without much strain. If they can’t, then the weight has gotten too heavy for them.

If the weight is kept light and you’re not increasing it every session, letting your kids do 2-3 sessions a week (on non-consecutive days) should be fine. Even just one a week may satisfy their nascent curiosity and interest.

Even If Your Kid Is Following a “Program,” Mix Things Up

Even if your 10-year-old is following a semi-structured weightlifting program, make sure they mix in other exercises. Kids should be exposed to as many physical movements as possible when they’re young. Specializing at a young age can be detrimental to athletic performance later in life, so make sure they throw medicine balls, swing a kettlebell, do pull-ups, and perform simple bodyweight movements and MovNat exercises.

Bottom line: Weightlifting is perfectly safe for your children to do. It won’t stunt their growth and they aren’t likely to injure themselves doing it. Before your kid hits puberty, let them practice the movements as much as they want with a light bar made for children. Don’t introduce regular training that progressively adds significant load to each session until they hit Tanner Stage 4 puberty. Keep on being a good example of fitness until they’re out of the house (and beyond!).

The post When Can Kids Start Lifting Weights? appeared first on The Art of Manliness.

Read more about this at artofmanliness.com.