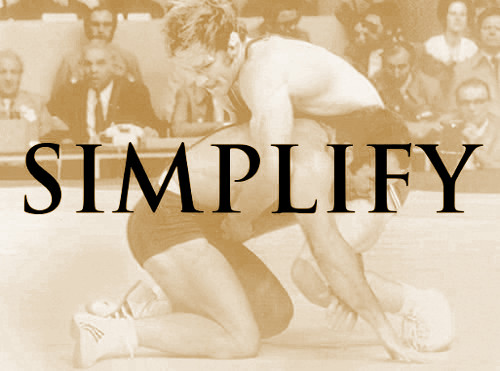 Over the past few weeks, I’ve posted short clips to Instagram that shared wisdom from legends such as Masahiko Kimura, Dan Gable, and Fedor Emelianko. Each of the videos was trimmed down to one minute per Instagram guidelines, so I’ll use this entry to share links to the full versions.

In addition, it’s worth noting a similarity that exists within the stories. Although each individual is unique, one theme that’s universal to all is a simple, yet hard style of training. Complexity was nonexistent. There were no magical secrets, but rather extreme examples of hard work and discipline.

Throughout this blog’s history, I’ve encouraged readers to simplify their training. I’ve shared numerous examples of my own approach, but it’s always useful to listen and learn from others as well. With that in mind, I believe the examples above will prove beneficial as far as seeing the possibilities that exist through hard, consistent work.

The work itself will never be easy, but the approach one follows can be simple. There are no secrets or magic formulas. And that’s an important lesson to learn as many players in the industry try to deny such truths. Their reasoning is simple. To put it bluntly, there’s more money to be made with complexity. Attributes such as hard work and discipline are not nearly as profitable. They can’t be packaged, sold, or downloaded. They must come from within.

Fortunately though, hard work and discipline are freely available to all. You don’t need a credit card or Paypal account. It doesn’t matter where you live, where you’re from, or what you’ve done in the past. Anyone can commit themselves to the grind at any time. It may sound cliché, but it all boils down to how bad you want it. Only you can decide.

“The ability to simplify means to eliminate the unnecessary so that the necessary may speak.” – Hans Hofmann

The post Simplify with Kimura, Dan Gable, and Fedor appeared first on RossTraining.com.