Growing up, I would get made fun of by my family for how much of it I would eat (seriously, two or three massive platefuls in one sitting).

Not enough of a visual?

How about this: as a toddler, I’d run into the dining room struggling to rip my shirt over my oversized head so that I could eat my spaghetti as fast as possible without getting sauce on my clothes.  After dinner my parents would have to practically hose me down in the backyard I was so messy – totally worth it.

Now, in my quest for a healthier lifestyle over the past few years, I’ve learned that…gasp…gallons of pasta at each meal isn’t the healthiest thing in the world!  So, I’ve cut back drastically on my pasta intake – I probably eat pasta once every few months now, when I’m out at an Italian restaurant with friends and feel like letting go for a meal.

If you are a paleo person but love pasta, I feel ya.  This could help.

Maybe you’re not paleo, but you’re looking for an alternative to carb-heavy pasta.  This will help you too.

Today, you’re gonna learn how to cook Paleo Pasta.  Now, this recipe takes a little longer and is a little bit more complex than the easy Chicken Stirfry I taught you how to cook before.

Yeah, eating a small portion of regular spaghetti every now and then ain’t gonna kill ya, but I found preparing paleo spaghetti and meat sauce to be a fun challenge, it took me out of my comfort zone in the kitchen by making me do new things, and actually turned out to be freaking delicious and nutritious.

Let’s level up your cooking. 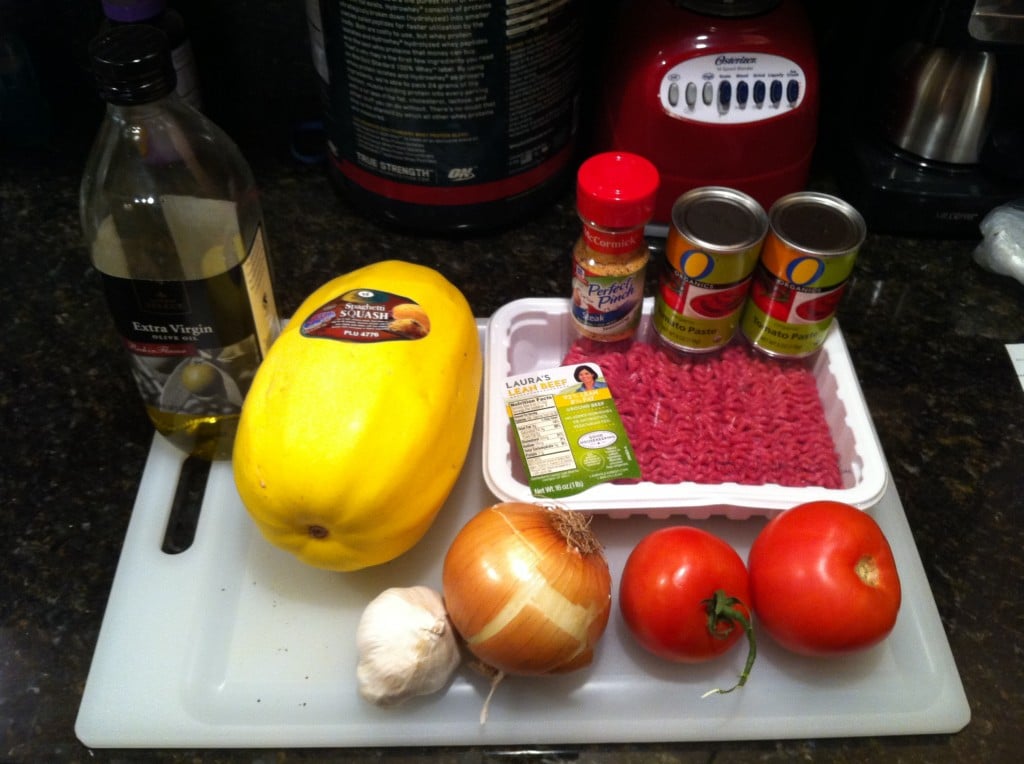 1lb. of Grass-fed Ground Beef (my grocery store didn’t have grass-fed, so I went with regular)
1 Onion
2 Tomatoes
2 Small Cans of Organic Tomato Paste (check the ingredients – it should only contain organic tomatoes…though look for JARRED tomato paste or make your own.)
1 Garlic Clove (it’s the small part that you’re breaking off a garlic bulb. i’ll explain more later).
Pepper…and salt if you want some.
Italian Seasoning (it’ll be in the spices aisle – pick the one that’s labeled “ITALIAN SEASONING.”  To be sure, open and smell – if it smells like ITALIAN SEASONING, you’re on the right track.  If you can’t find it at this point, you should probably just sit down and give up).
1 Medium Spaghetti Squash – will make enough for two people.
Olive Oil – I like extra virgin olive oil.

If you’re like me (a nerd who generally stays away from the kitchen), half the stuff on the grocery list will be new to you.  I can certainly say I’ve never purchased a spaghetti squash before.  Honestly though, I found it fun to go exploring in new parts of the grocery store and track down these items.  Just keep the ingredient list with you, ask people for help if you need it, and pretend like you’re a contestant on Super Market Sweep (not that I do that…every time I’m in a store….). 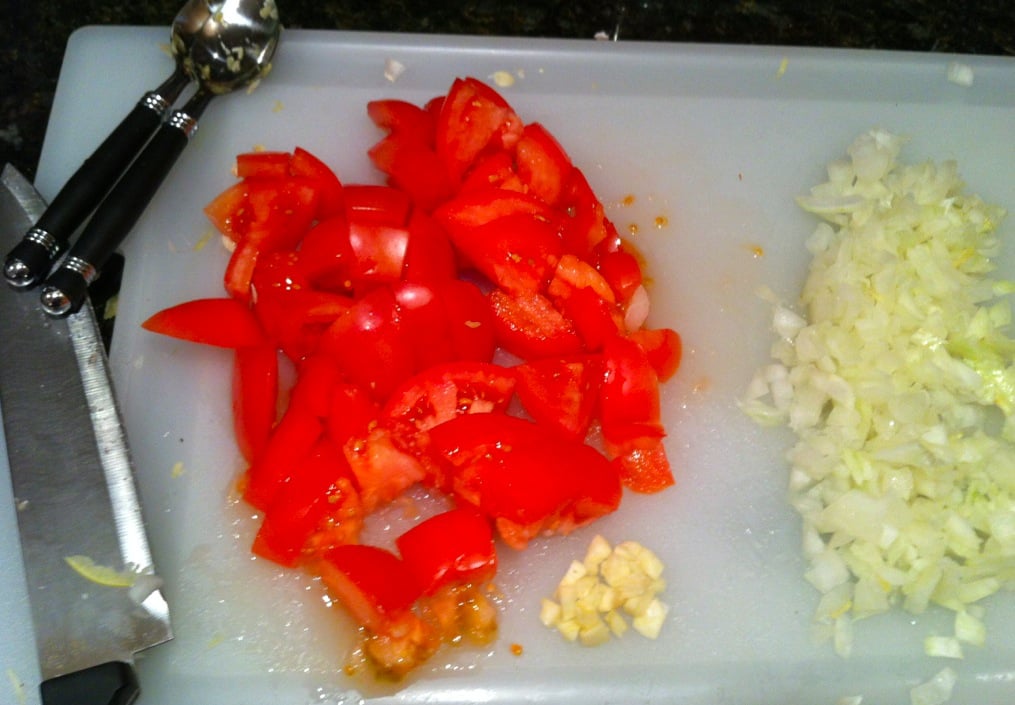 Start by pre-heating your oven to 400 degrees.  This will take a while to get warm so it gives you time to chop up your veggies and so on.

Chop your onion in half, and then peel off the outside layer – we only need half of it.  Put the other half in a plastic bag and stick it in your fridge. 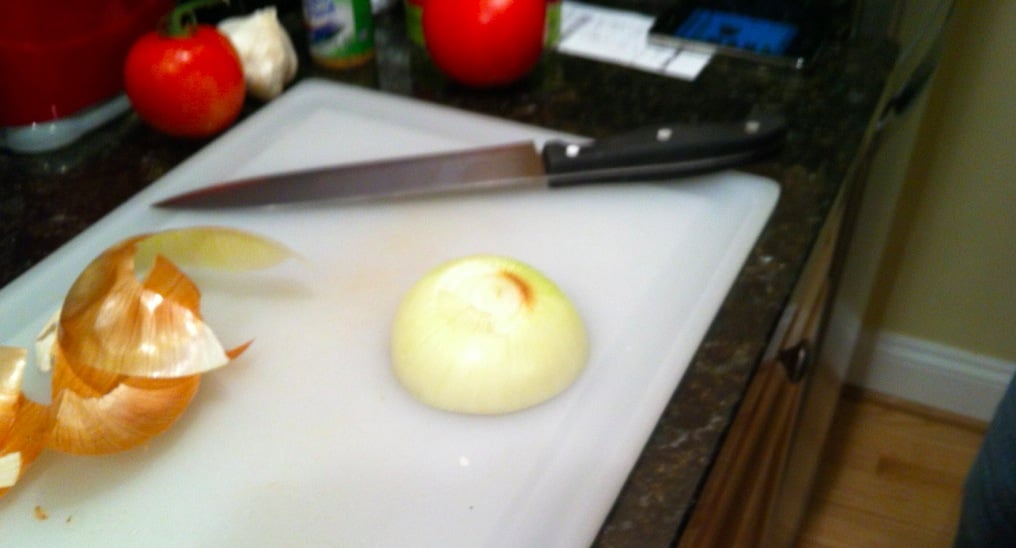 After that, start slicing and dicing like a mofo until the onion is all chopped up.  Yeah, you might cry – suck it up.  If you have a food processor or a Slap Chop (you lucky bastard), this will be way easier.  I don’t have either of those, so I did it the old school way. 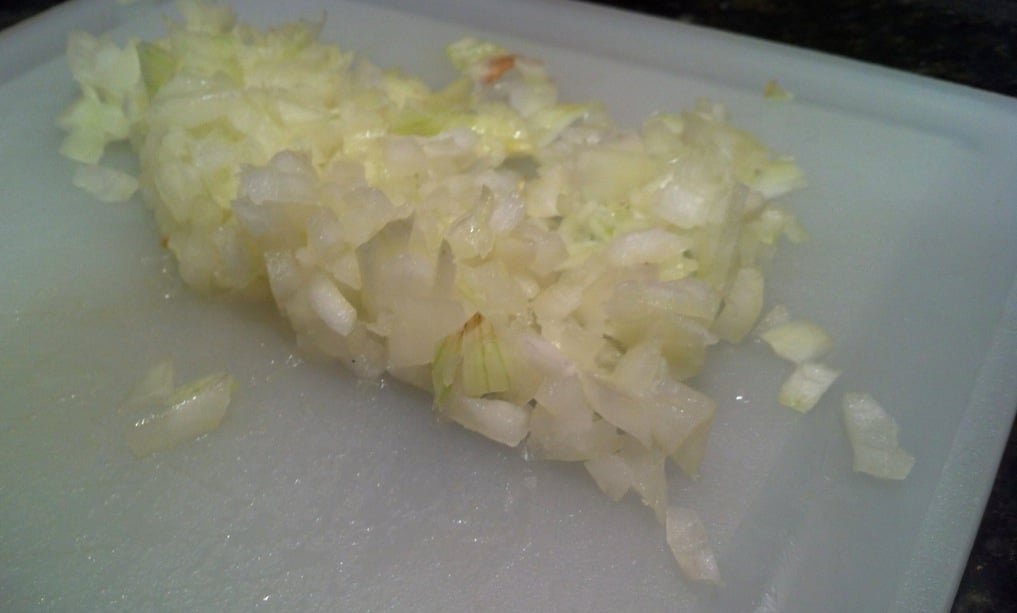 Next, rip off a clove of garlic – we only need a little bit of it.  Hang the rest of the garlic bulb around your neck to ward off vampires. 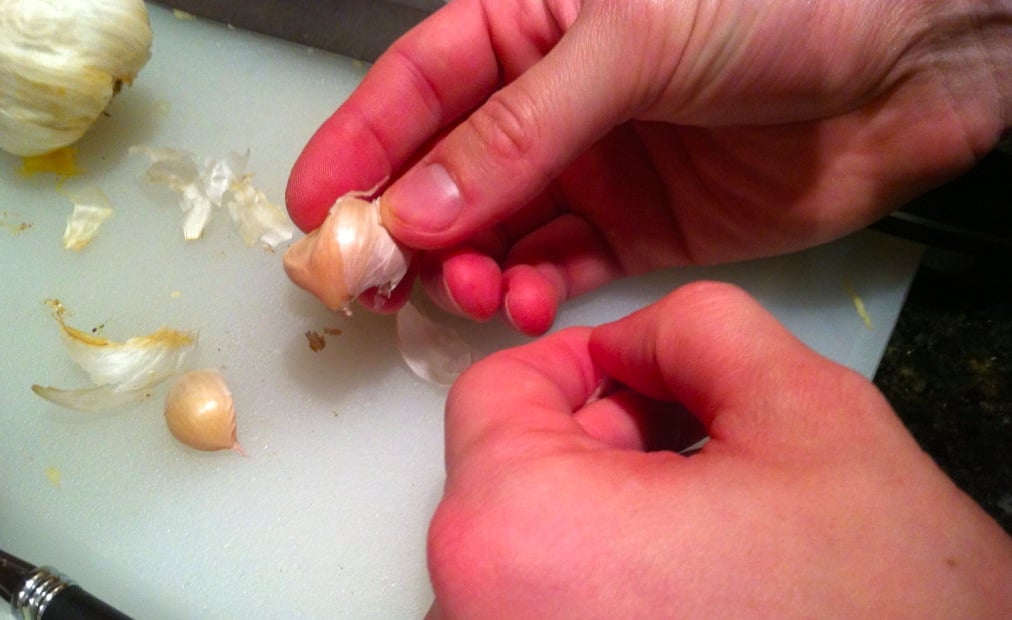 Take that little section, break it apart, and then carefully chop off the tiny ends of each section.  Then, use the side of your knife to smush it by pressing down hard on the side of your knife.  Peel off the outer layer, and then chop up the inside of it as small as you can without chopping off any fingers. That would result in a lot of blood, and the vampires won’t care about your garlic necklace, and you’re gonna have a bad time.  If you don’t feel like buying/chopping garlic, you can use garlic powder to add to the meat later, though it’s not nearly as fun. 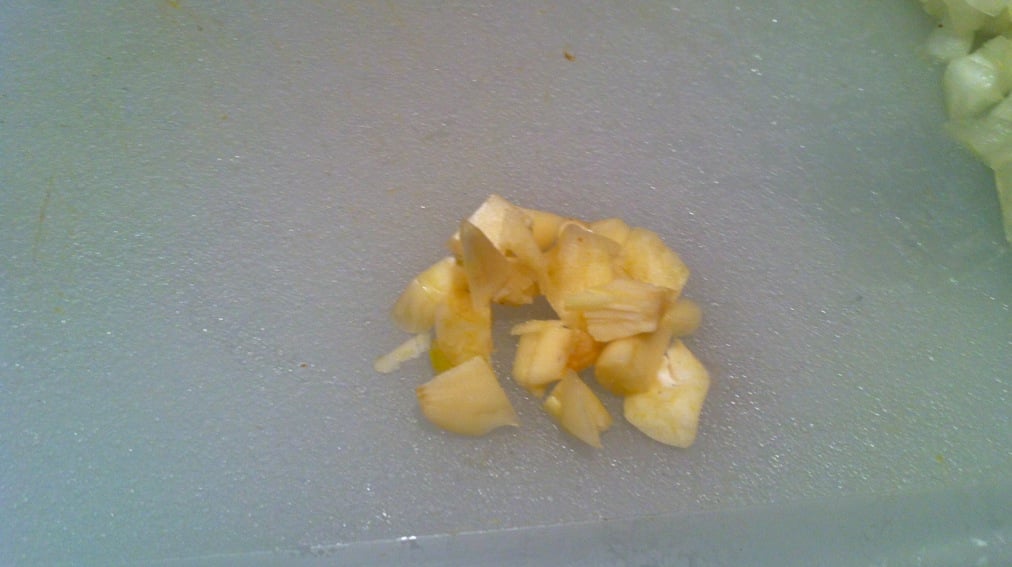 Grab your two tomatoes (not a euphemism).  No seriously though, grab those two tomatoes.  Use your knife to carefully carve out the top part of it… 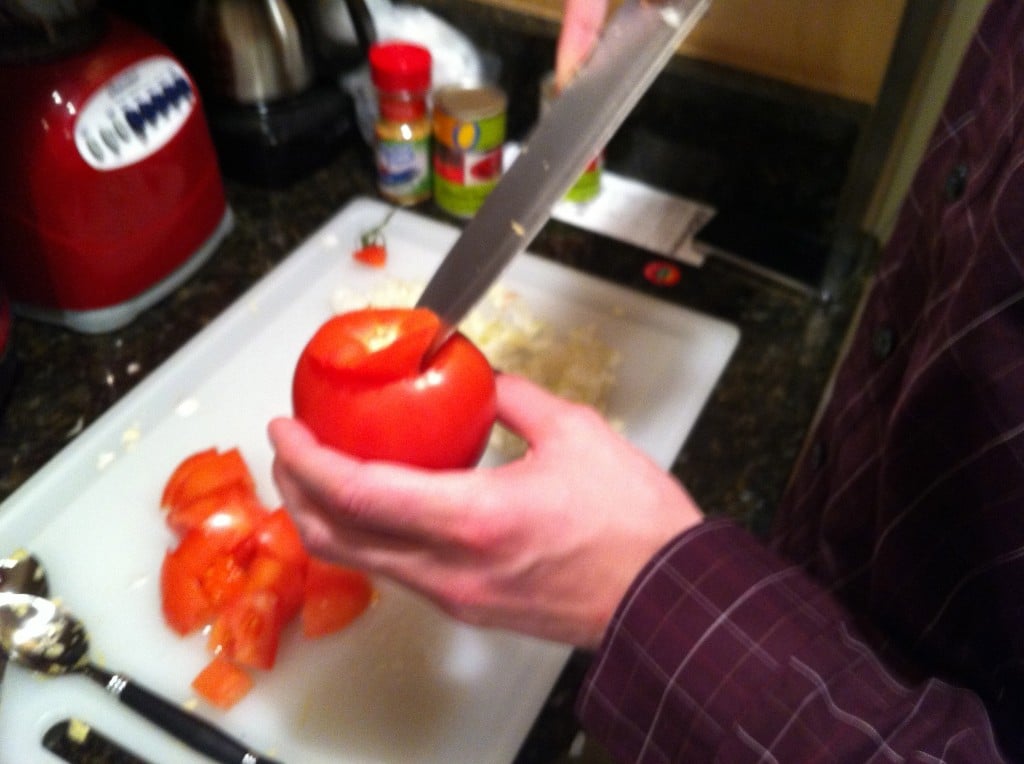 Then cut them in half, then chop them up into smaller pieces.  Depending on how you like your spaghetti sauce, cut them to your desired size – bigger chunks in your sauce or no?  The choice is yours, sucka. 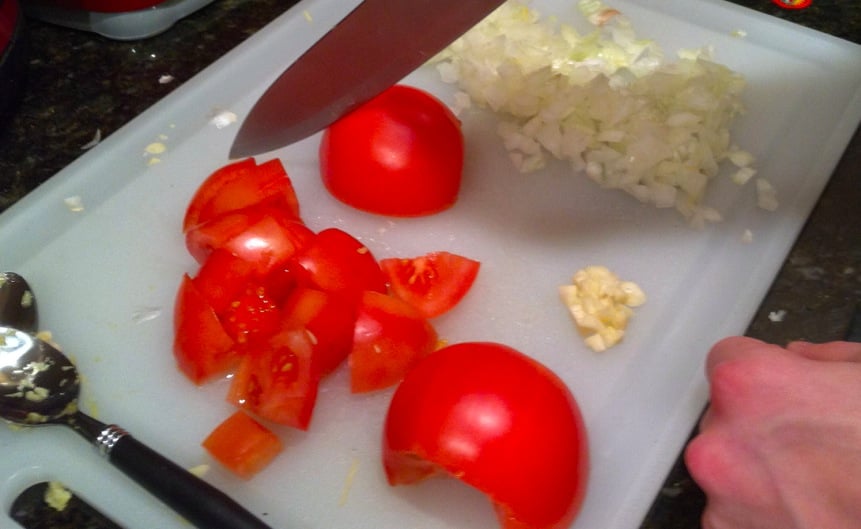 Next, take your spaghetti squash, and use your knife to cut it in half.  Because the middle is kind of hollow and full of gooey stuff (like a pumpkin), I found it easiest to cut into the side of the squash, and then work the knife around it the long way.  Watch this video for a good demonstration.  JUST BE CAREFUL. 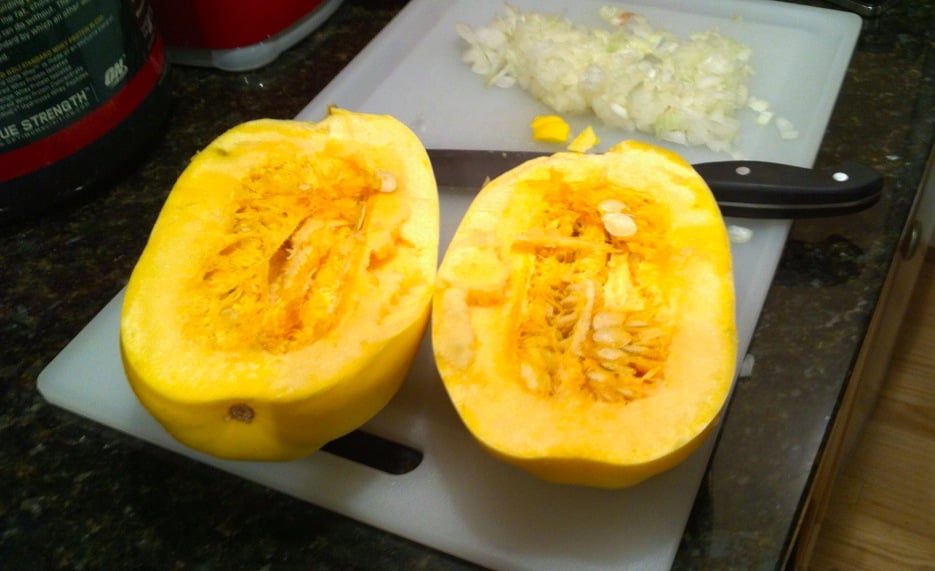 Use a spoon and scrape out all of the middle junk in the squash.  Yup, it’s kind of gross. Get over it. 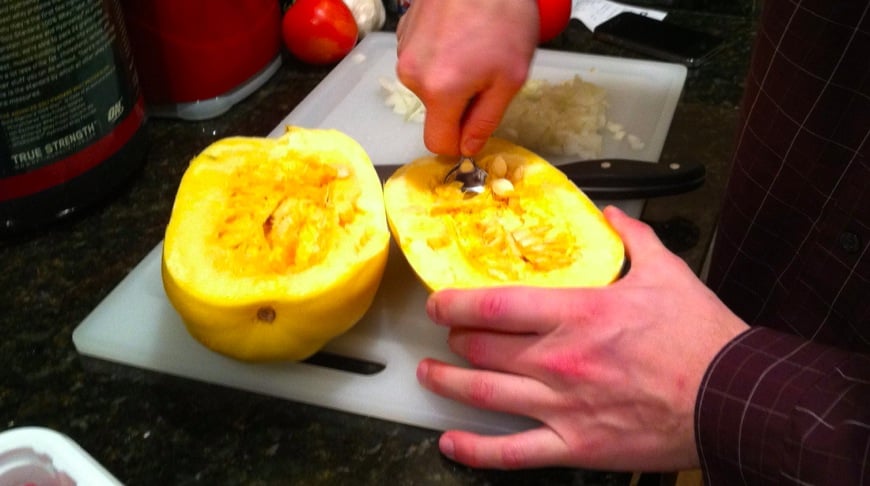 Take your hollowed out squash, and drizzle the insides with olive oil, pepper, and tiny bit of salt. 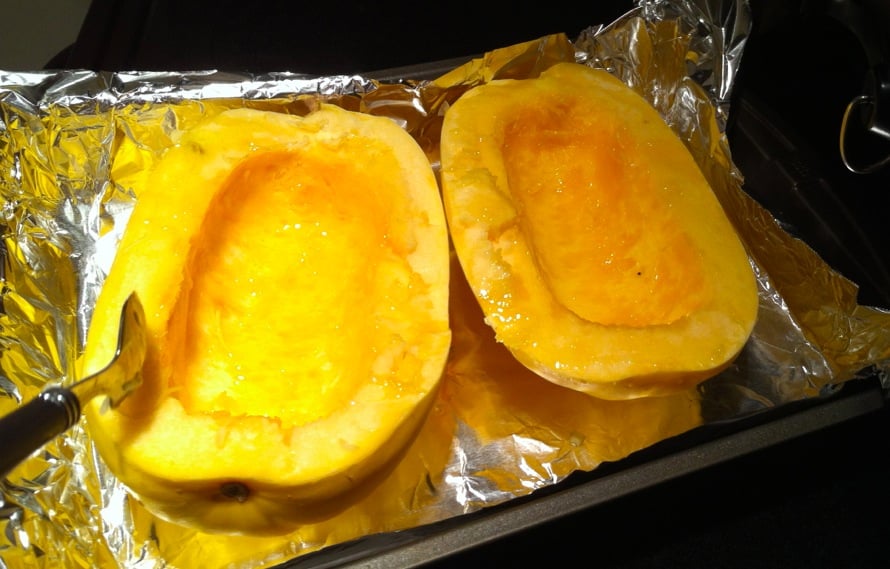 Give them a minute or two to sit and soak in the oil, and then put them face down on the cookie sheet, and stick them in the oven (which is now at 400 degrees) for 40 minutes. 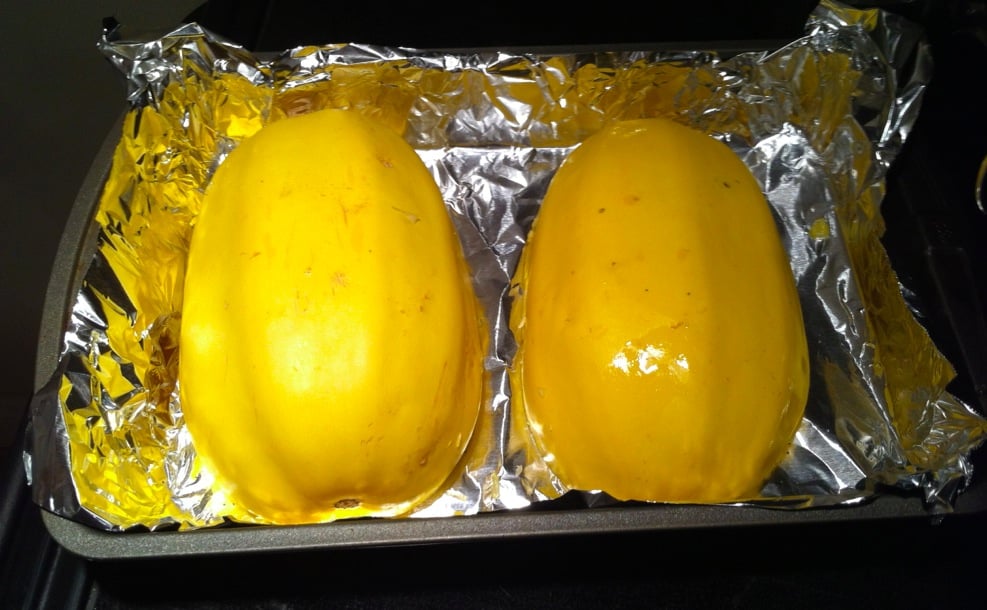 While the spaghetti squash is cooking in the oven, put your skillet on the stove, add a little bit of olive oil, and drop in your diced onions.  After a few minutes, they’ll start to take on a clear/yellowish color as they sizzle and cook. 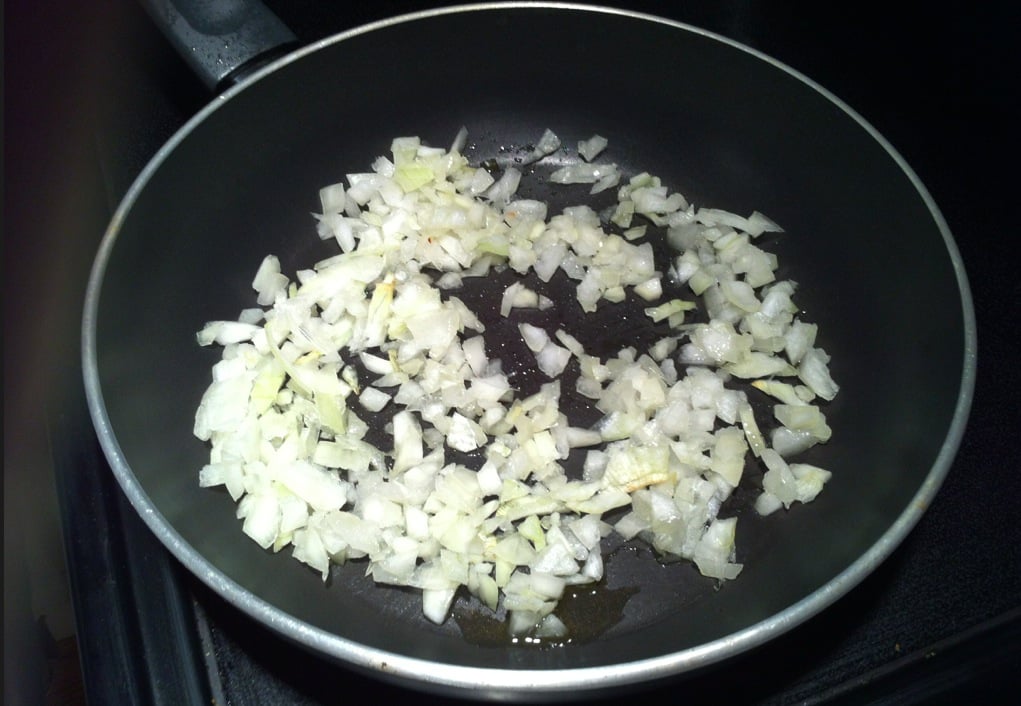 Now it’s time to add the garlic, and mix that around for a minute or two…

And then add the beef! 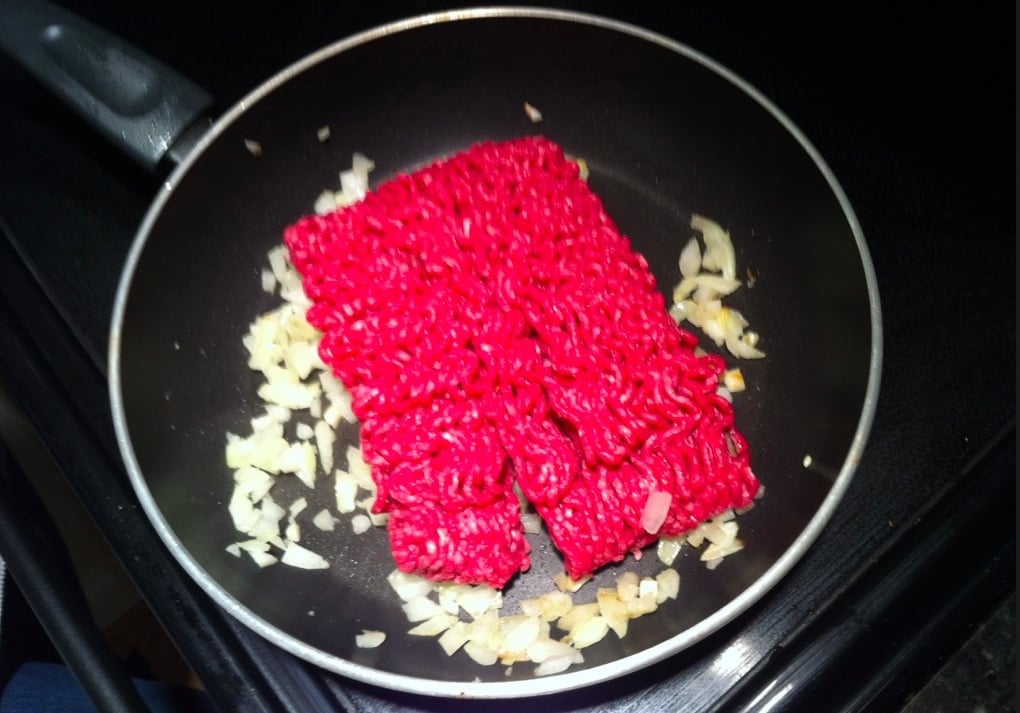 Using your spatula, chop up the beef and mix it up with the onions and garlic.

Now, make it rain with your Italian seasoning and pepper.  And by that I mean “sprinkle it liberally.”

Continue stirring and chopping and mixing like a boss until the meat is a nice brown color. 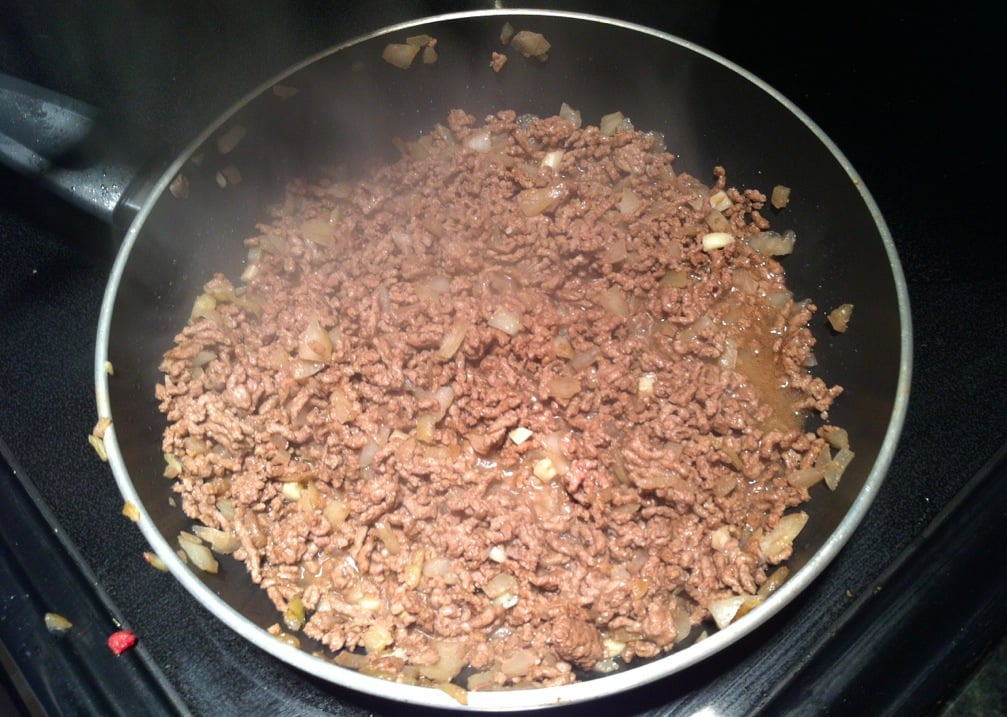 When the meat is done cooking, take the pan off the stove, and place it on one of the other not-hot burners…

OR, you can strain the beef and get rid of the grease.  I chose to strain our meal for the evening.  Use a strainer, collect the grease in a bowl, and then when the grease cools down, dump it into a coffee canister or other container that you can keep in the freezer and then eventually dispose of properly.  Google “how to get rid of grease” if you need help here.

Combining the sauce AND THE SPAGHETTI SQUASH

Now, while your meat is cooking, take your empty pot, open up your two cans of tomato paste, and use a knife to scoop them out and pour in.  Then add your tomatoes.

Put the pot on low heat.  Around now, your meat should be cooked.

Then dump in the meat, onions, and garlic into the pot and mix it all up.  If your sauce isn’t saucy enough, take your empty tomato paste can and dump in a can-sized amount of water (do one and see how the sauce looks, and then add a second if necessary).  At this point, feel free to add some more Italian seasoning and pepper. 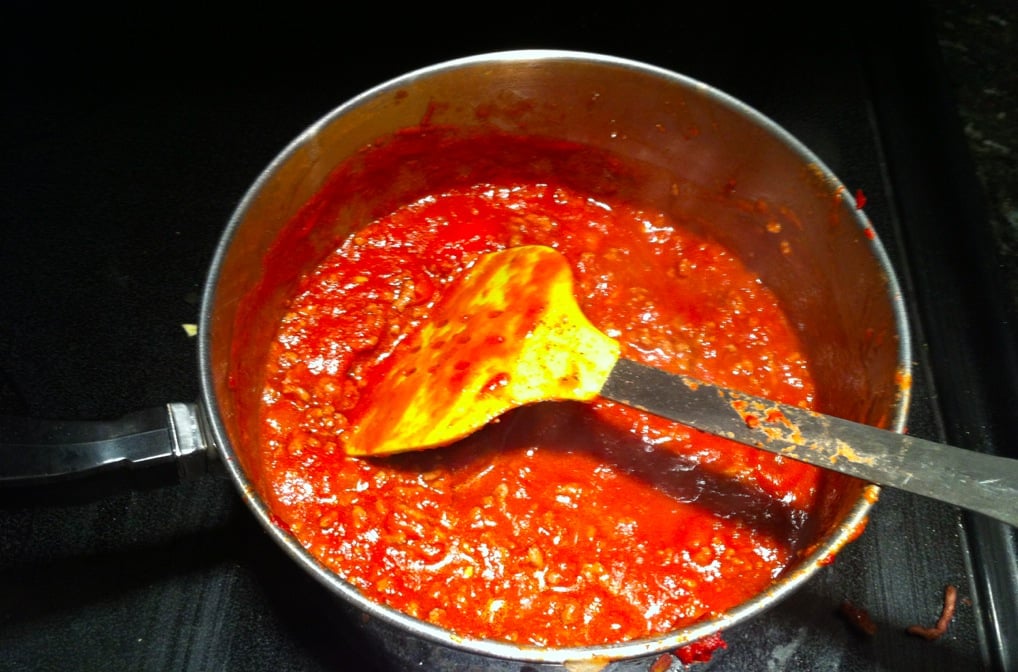 You can leave the pot on really low heat and cover it up, while you’re finishing up everything else. Just stir it every so often so the bottom doesn’t burn.

Putting it all together

Pull your squash out of the oven after the 40 minutes is up, and using a pot holder and a knife/fork, flip the two halves over over.

Having two plates ready, use a fork to pull apart the inside of the squash…it’ll come apart very easily and look like spaghetti. 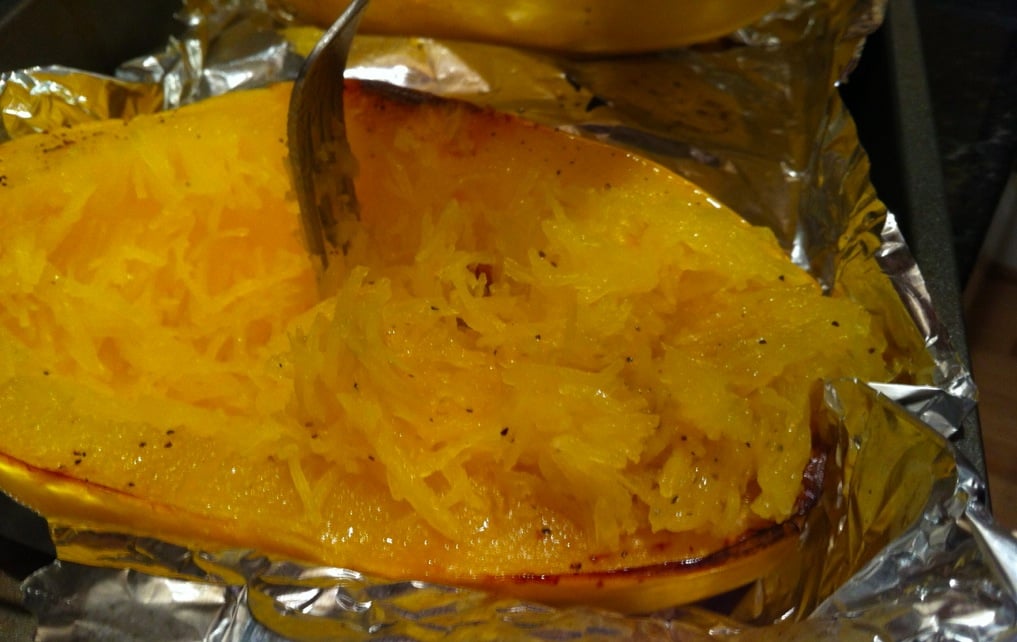 This is the point where you say “OHHHH SO THAT’S WHY ITS CALLED SPAGHETTI SQUASH!”

Add your sauce on top, and BAM you have your home cooked, paleo spaghetti meal.  Finish off with a glass of water, red wine (not technically paleo I guess but hey, live a little), or some Drain-O and you’re good to go. 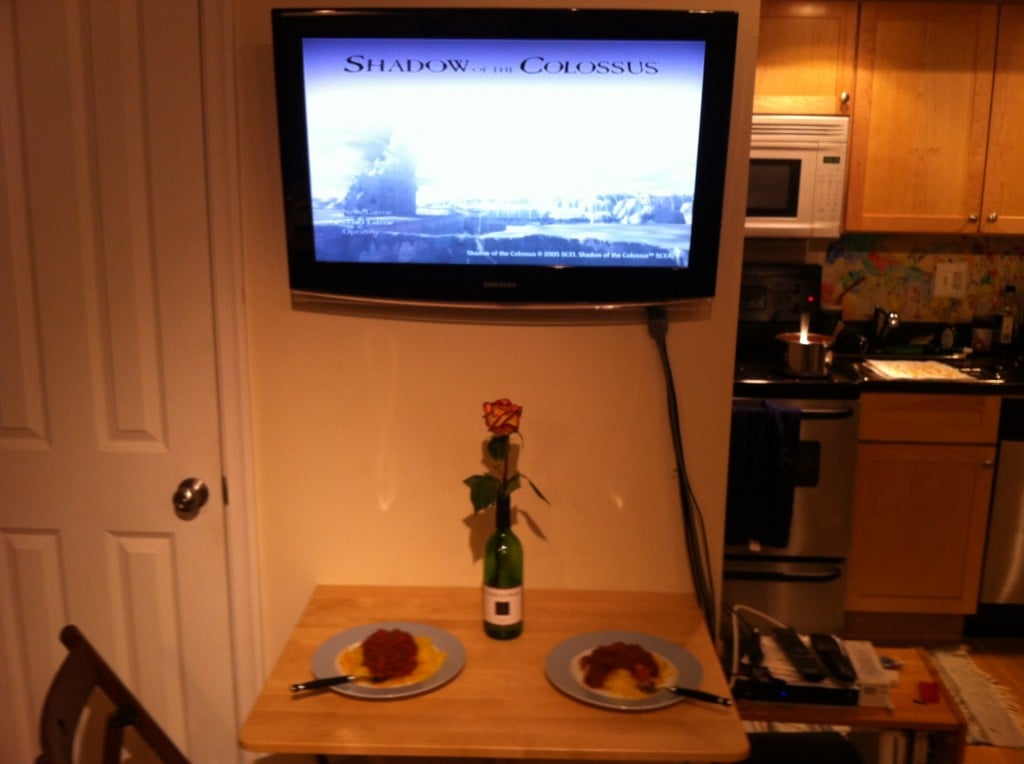 The dinner table is set.  Flower in empty wine bottle and Shadow of the Colossus on PS3 are optional.

I honestly had WAY more fun cooking this than was expected.  (thanks Jessie for helping me out and making sure I didn’t chop off any appendages).

If you’re struggling to come up with a fun date idea…nothing goes over better than cooking a meal together – and I think the total cost of the ingredients was around $15.  This meal made full servings for two people with enough sauce left over for two or three more servings.

If you don’t have anybody else to cook for, no worries!  This meal will make plenty of food for you to have for dinner tonight, lunch tomorrow, and beyond.  Plus, you can eat your spaghetti WHILE playing Shadow of the Colossus and nobody will yell at you.

I’m thinking of doing some more “how to cook easy meals” post here on NF real soon, coming from the perspective of a newbie in the kitchen.  They probably won’t all be paleo/primal, but they’ll be healthy and super easy to cook.

Is that something you’d be interested in every few weeks?  If I do, anything else you’d like to see in the posts?

Any thoughts, comments, or questions?

PS: We’ve been adding these recipes and a few dozen more to our Nerd Fitness Academy, which has recipes, meal plans, workout plans, and the ability to complete quests and missions and level up as you get healthier. Check it out!

thanks to Fast Paleo for the recipe inspiration.

Read more about this at nerdfitness.com.