When I first started training Simple & Sinister in 2014, I never planned on reaching the Sinister goal. The thought of one-arm swings with the 32kg kettlebell was crazy to me.

I started kettlebell training to supplement my distance running, and I had no desire to be that strong. My plan was to reach Simple before I started training for the SFG Level I Certification. I accomplished the Simple standard, but throughout my Certification prep training, on busy days where I only had thirty minutes to train, I often returned to the Simple swing and get-up standards—100 one-arm swings in five minutes with the 24kg kettlebell followed by 10 get-ups with the 16kg kettlebell in ten minutes. This was a quick and simple way to practice technique and get in some conditioning. 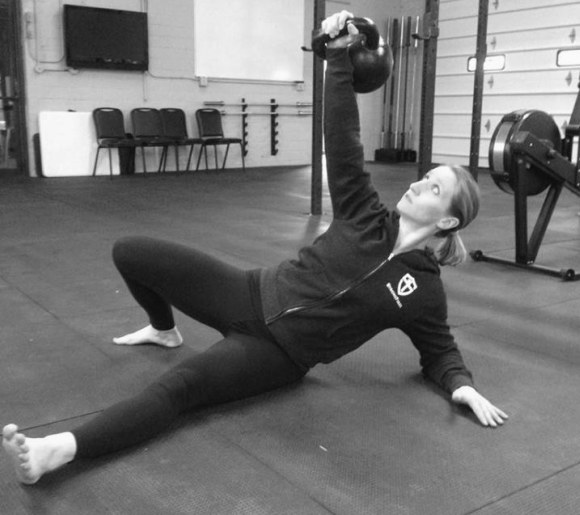 I remembered an article and program that Pavel had written, From Simple to Sinister, and decided to follow this program in pursuit of the Sinister goal. My original idea was to follow Pavel’s program exactly. I did the best I could, but as I started training, I realized I had to make a few changes to make the program work for me.

Understanding the Variable of Volume

For the next eight weeks, I followed months one and two of Pavel’s program as closely as I could. In this phase of my training, the modifications I made were in volume only.

Pavel’s program is designed to wave the volume. The plan is to complete the same number of reps every month, but every week should be different. The plan is 2,000 reps per month. This averages 500 reps per week. If we wave the volume, some weeks will be less than 500 and others will be more. Pavel programmed weeks with 300, 400, 600, and 700 reps. The number of reps per day is waved from 60 to 200. The number of training sessions per week is also waved from three to five.

I had to adjust the volume to take care of my hands. The high volume with the heavier bell was hard on my hands, and I experienced more calluses and tears than normal. I was never able to complete a week with 700 swings. I attempted a couple times, but the most I was able to complete without tearing was 660 in one week. I scaled the volume back to 1,800 reps per month and three to four sessions per week, and I planned my weeks with 300, 400, 500, and 600 swings. I planned 60 to 200 reps per day.

As I progressed, I learned to take better care of my hands. I also modified the volume mid-week if necessary. For example, on Monday, if I felt a callus start to tear, I stopped for the day. If I was at 120 swings but had planned 160, I simply added the remaining 40 reps to a session later in the week. I also learned that after a day with 200 reps, I had to take a day off to let my hands recover.

After eight weeks, I was able to complete 100 one-arm swings in five minutes with the 28kg and 10 get-ups in ten minutes with the 20kg. It was time to move on to swings with the 32kg. This proved to be a bigger challenge and required a few more modifications to the program. 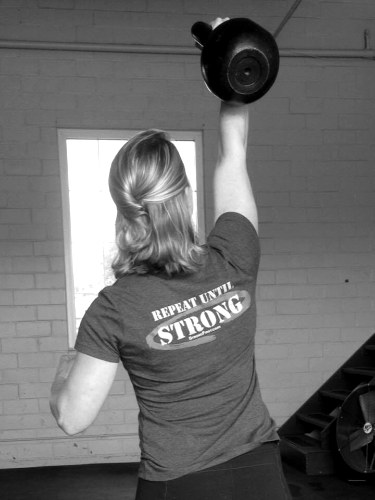 Progressing to the 32kg Kettlebell

My first attempt at swings with the 32kg did not go as planned. I started on my right (stronger) arm. On the seventh rep, the bell flew out of my hand. On my left side, I only made 5 reps before the bell flew. I should’ve been smarter and set the bell down sooner because I felt that my grip wasn’t strong enough a couple reps before I dropped the bell.

I rested for a few minutes trying to analyze what happened and what to do next. I came to the conclusion that my swing form must’ve been good. I had always been told that when swinging a bell that is a high percentage of your body weight, your body will lean back to offset the weight, and if you let go of the bell, you will fall backward. Well, I did almost fall over backward, so I decided it was my grip strength that needed work.

The rest of that day, I tried to figure out what to do. I went back to my Simple & Sinister book and read through the progressions and examples starting on page 81. This progression adds a heavier weight one set at a time. For example:

These options all seemed like there were too many variables and getting too complicated. This was supposed to be simple programming, so I came up with an option that worked for me. I was confident I could complete a few solid swings with the 32kg on each arm. So, I just had to do this in smaller steps. Rather than sets of 10 swings, I was going to start with sets of 3.

The next day, my training session consisted of one-arm swings with the 32kg. I completed 10 sets (five each side) of 3 swings. I could complete a set of 3 with solid technique and did not feel like I was going to drop the bell. I continued with sets of 3 for two weeks. After two weeks, I could complete sets of 5 with solid technique, so I bumped the reps up to 5. Two more weeks went by, and I bumped up to sets of 7. They felt strong, so I stayed with sets of 7 for two weeks.

After this, I finally decided to test a set of 10 swings. After six weeks of training sets of 3-7 swings, I was able to complete sets of 10 swings, on each arm, with the 32kg with confidence. This alone was a huge feeling of accomplishment. When I started with the 32kg, I was questioning if Sinister was possible for me. Now, I finally started to feel like this Sinister goal could happen.

During my sessions, I followed the pattern of one set right, set the bell down and rest, one set left, set the bell down and rest. I also followed the wave the volume pattern in the program while doing sets of 3, 5, and 7. For example, the rep scheme on month 1 week 1 has 160 reps on Friday or 16 sets of 10 (8 sets each arm). I stuck to the same number of sets, but modified the number of reps, so I would complete 16 total sets of 3, 5, or 7.

One thing I did differently than the program was time my rest. The program says “there is no need to time rest periods, just rest long enough to maintain maximal power output.” I did set a timer for every session. I knew maintaining power output was important, and I also knew I needed to set a timer to keep myself on track. The timer also helped me mentally. I have a background in distance running. I’m used to slowly “chipping” away at the time. For me, this was a natural way to track my progress and keep myself on target. 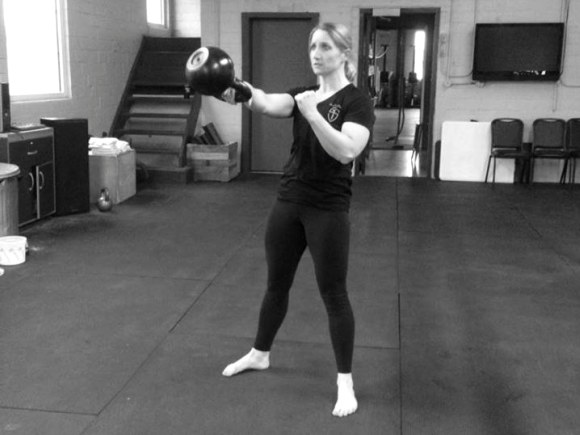 When I was training with the 32kg kettlebell, I needed to pay even more attention to my hands. Just like with the 28kg, I had to cut the volume and frequency. I never trained S&S more than four days a week, and dropped down to three days in the last four weeks of my plan. Some days instead of one-arm swings, I did two-hand swings with the 32. I stuck to the same number of swings, but the two-hand swings were easier on my hands.

Toward the end, I started to get a little burned out. I thought about quitting and didn’t think I was ever going to make it. Now that I reflect on that, I think my body needed a little more rest. To give myself a break from swings, some days I went for a 4-5 mile run. I wouldn’t recommend this for everyone, but with my background in distance running, this worked for me. It was exactly what I needed physically and mentally. It gave my hands and body a break from the heavy swings. It was refreshing and a way for me to clear my mind and refocus on the final goal.

How I Trained the Get-up

I followed the same wave-the-volume idea, but I never had a set plan of how many get-ups I was going to do in a training session. I would finish all my swings, and then, depending on how I felt, would determine the number of get-ups, if any. For example, on days that were only 60 swings, I did more get-ups, up to 10 per side. On a higher volume swing day, I only completed 2 or 3 reps of get-ups per side.

I also had some days where I completed only swings or only get-ups. On a day I did 200 swings with the 32kg, I usually didn’t do any get-ups. If I tore a callus or my hands needed a rest so they wouldn’t tear, I only did get-ups. 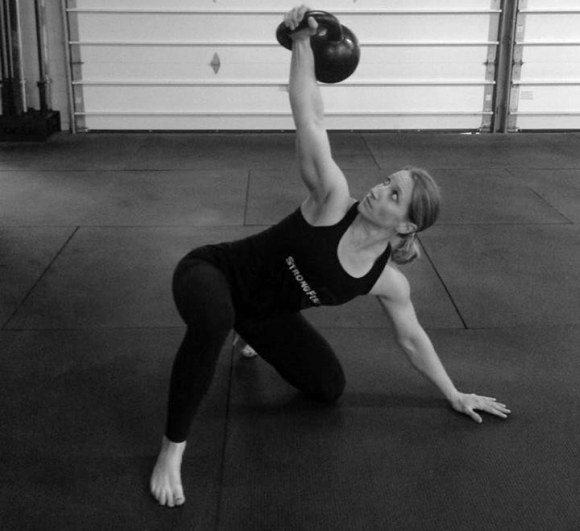 The Benefits of Achieving the Sinister Goal

I spent a total of 24 weeks progressing from Simple to Sinister. Eight weeks were spent working with the 28kg and sixteen weeks with the 32kg.

I also experienced a few unexpected results from this program:

My deadlift personal record increased from 275 to 300lbs.
My military press went from 20 to 24kg on both arms.
My max bodyweight pull-ups went from 6 to 10.
My weighted pull-up went from 8 to 14kg.

It’s been two years since I completed this goal. Since then, I’ve met several others in our StrongFirst community who are also working on reaching this milestone. It is one worthy of your time and efforts, but be prepared to be patient.

The post How I Trained for and Achieved My Sinister Goal appeared first on StrongFirst.