Home Personal development Body From Intimidated to Confident and Capable: The Power of Practicing Strength

I took my first kettlebell class in 2012. I was immediately enthralled by the swing. But like any newbie, my form needed a lot of help. My hips sat too high and my hinge was too shallow. My conditioning was such that I would leave every class dripping and red-faced. But I loved it.

When I decided to become a personal trainer, I knew I wanted get certified to teach kettlebells. I went to Master SFG Phil Scarito, close to home. He helped me prepare for my SFG Certification in New York City in 2014.

I was so nervous to perform my elements in front of his seasoned eye that all I could do was make jokes and tease him for being so hard on me. I had attempted the12kg snatch test with Phil during one of our private sessions. By the end I was coughing and sputtering—that good old exercise-induced asthma. Phil did his professional best not to laugh at me, but he did say, hands planted on his hips, “It’s only twelve kilos,” at which time I may or may not have curled into the fetal position right there on the turf.

After months of practicing, I passed my snatch test and all the other skills at the Certification, and when it was over Phil said, “I knew you’d pass.” I wanted to say, “Maybe could you have offered that crumb of that confidence before?” But I admired his method. It kept me nervous enough to practice, take notes, and actually read the manual. I went on to teach kettlebells with hard-earned confidence. The dream of assisting at a Certification one day began to take root, but, like achieving 130 snatches in five minutes, it seemed far-fetched. 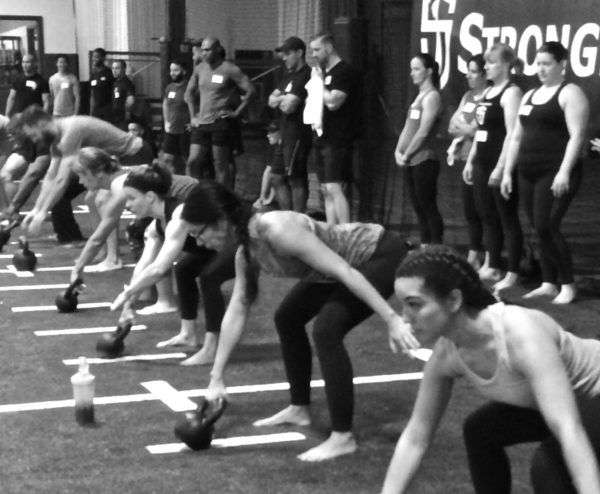 The Next Goal: Be Selected as an Assistant

I let that dream simmer in the back of my mind while I worked. Since 2014, I gained strength and weight, taught dozens of students, and nailed my 2016 Level II SFG Cert at 128 pounds, snatching the 16kg with no resulting hacking and coughing, and pressing the 20kg with relative ease. I was by no stretch the strongest at my Certification, but I felt capable.

Now in 2018, I have two bright, enthusiastic students who have registered for their Level I Certification. I couldn’t be prouder of them if I were their mother. Together we traveled to Phil’s studio for feedback on all our skills, since I plan to apply to assist—my seedling dream, once ridiculous, had ripened. 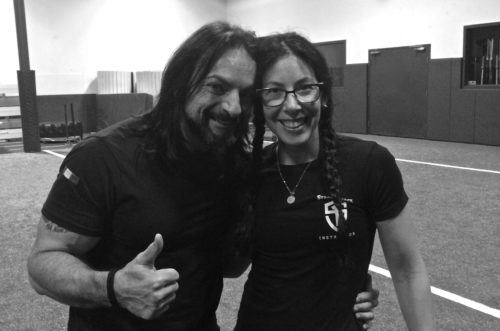 During our hour together I realized I wasn’t the same self-deprecating jokester who’d once been so unsure of herself. Not only was I stronger physically, but my confidence had grown and solidified. And I had students to show for it.

Phil gave us all what he called nuggets—little jewels of wisdom that immediately had glittering effects. A deeper goblet squat here, a snappier swing there, a more fully-engaged lat for everyone. When I trained on my own in my #couragecorner the following afternoon, I utilized Phil’s get-up nugget to achieve a new PR with the 24kg that I know will radiate gains in other areas. I was of course delighted, but moreover, I saw the long view backwards, to where I’d started, when the 12kg bell was a force to be reckoned with and the thought of assisting at a Cert seemed absurd.

This, to me, is what StrongFirst is all about. Strength is not only a physical skill, but a mental one that requires the same rigorous attention. This attention empowers me to thrive in ways I never considered before hoisting my first kettlebell in 2012, and it will keep empowering me as long as I tend to it.

The post From Intimidated to Confident and Capable: The Power of Practicing Strength appeared first on StrongFirst.